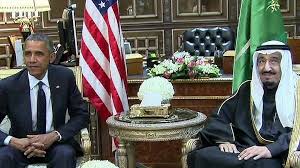 Hopefully King Salmon packed a decent after shave and some breath mints as he jetted off to Washington. Salman Aldosary knows a man on a honey moon when he sees one, “By choosing the United States to be the destination of his first visit since acceding to the Saudi throne, the Custodian of the Two Holy Mosques King Salman Bin Abdulaziz has dismissed speculation that the honeymoon between Washington and Riyadh was coming to an end.” This sounds like the official Saudi line, perhaps to keep that old flame Iran at bay in article “King Salman in Washington” appearing in Asharq Al-Awsat. A message of stability is important when the parents are fighting and considering the changes and disruption caused by Iran in the Persian Gulf there’s a lot of fighting. Yemen has become a Saudi war right in their own backdoor, Iran is about to become an even greater force for destabilization as the sanctions peel off with no replacement policy to keep Iran at bay. Meanwhile, the Saudis have a plan to starve Iran, Russian and those fracking US frackers of money by keeping the price of oil low. Meanwhile, Tom Friedman reminds the world of Saudi Arabia’s radical underbelly but the truth is that Saudi Arabia may be in a bit of midlife crisis, women can’t drive but they can no vote. What you vote for in an absolute monarchy is unclear to me but at least Women are on equal footing the men on this problem and I do mean equal footing.

The US under President Obama has pretty much nailed the coffin shut in Riyadh’s interests, Iraq has become more or less an Iranian client state, the US did not support moderates in Syria so it looks like the civil war will only produce radicalism, and now Iran is set to be a bigger and more aggressive problem for the entire Middle East. On the other hand, the US should be relatively pleased with Saudi Arabia, the oil over supply really helped the US with both Iran and Russia, the Saudi’s increasing acceptance of Israel may help make peace more likely and the possible Saudi interest in a Kurdish state could really help stabilize the region in the long run. But like in any honeymoon in Saudi Arabia, we don’t really know what kind of man Salmon is yet, he may prove inconsistent and he reason to be upset but like any such honeymoon, it is not that uncommon for it to get rough towards the end. All we really know is that two world leaders feel the need to pose together and that does say something about the health of the alliance. Salmon’s message will inevitably be, even the happiest of marriages face considerable stress and need absolute cooperation when the house is on fire and the Saudi Arabia isn’t seeing much cooperation from us but like a good bride our president says just be patient. I think the world not just King Salmon needs to know how the US will deal with Iran going forward.
Posted by dubeity at 10:39 AM